Deprecated: sanitize_url is deprecated since version 2.8.0! Use esc_url_raw() instead. in /home/jesusfree1/public_html/wp-includes/functions.php on line 4859
 Mourn With Those Who Mourn - Jesus Frees Us 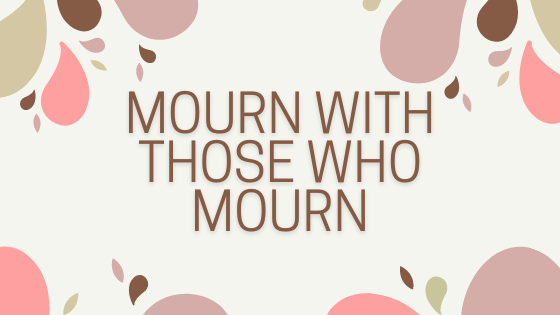 There’s really no way around what this verse tells us to do. It doesn’t say mourn with only those who go to the same church as you. Rejoice only with people who have the same skin color as you. Make sure you mourn only with people who speak the same language as you. Rejoice with those that are in the same political party. No, this verse is inclusive, eliminating all borders and prerequisites.

One day we heard wailing outside our apartment and Ashiram went to check on the source. He discovered our neighbor’s mom passed away.  I’ll be honest when he asked me to go with him to visit our neighbors I was hesitant. I thought in my mind, “I don’t really know them that well other than the younger girl Rebecca. Won’t it be awkward? Will I be intruding?”

I tried to delay, saying I needed to change my clothes. Go to the restroom. I was grappling internally with how to personally embrace a stranger’s sorrow. As I prayed in the bathroom that the Lord would give me words, he told me that I didn’t know what to do, but he would show me.

When we got to the house one woman went to the kitchen to bring us water.

She served us in the middle of suffering.

In the middle of pain, she’s pouring us something to drink. What a beautiful representation of Christ. Before he was sent to his death, he kneeled on the ground and washed his disciples’ feet. As he hung on the cross he made arrangements for his mother’s future care.  Never once neglecting the posture of serving.

I could still hear wailing echoing from a room down the hall. I leaned over to Ashiram and whispered that I wanted to hug that person. We went into the bedroom and gathered this weeping woman into our arms. It was like a wave of her sorrow crashed into me the moment we embraced.

I began to weep with her.

After we let go she went to the bathroom and her crying slowly subsided. And then it hit me. I prayed and asked God for the words, but he said he would SHOW ME. Sometimes our actions will speak louder than any words when we see others suffering. Jesus arrived after Lazarus’ death. Although he knew he would raise him from the dead, Jesus still wept. He felt the grief of the people around him. He didn’t minimize their pain or ignore it.

He welcomed the opportunity to share the overwhelming burden of bereavement.

That’s my Jesus. And that’s who I want to be more like each passing day.

How can you show up this week in those moments of mourning or rejoicing? Be present. Give a healing hug to the hurting. Let them know they aren’t alone.

It’s not always about speaking up but showing up.

Do you know someone who is hurting? Send them a simple text letting them know you are thinking of them.

Let’s Be Digital Penpals
No comments yet
mourn