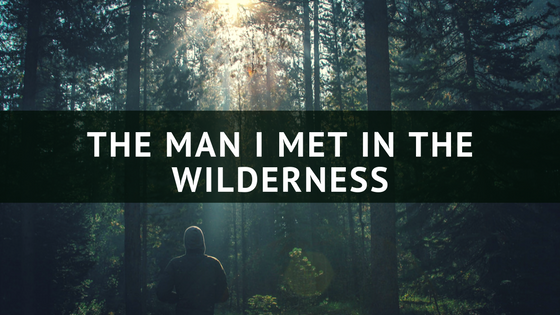 This blog sounds like it’s either about my close encounter with an ax murderer in the woods or my happily ever after with the Brawny man. It’s neither. But unfortunately, or fortunately  depending on which plot you were rooting for,  it’s neither.

I was enjoying my “dream praycation” hanging out in my hammock – or my official happy place.  I’m dozing off in the shade, curled up like a caterpillar in its cocoon, with a soft wind gently swaying me from side-to-side. I’m allowing my mind to wander to far away places when I hear a “Hey!” Startled, I shake off my slumber and look around to see a man coming my way. 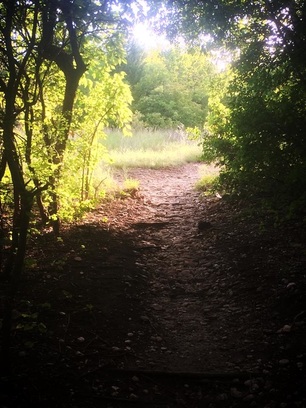 As he got closer, I could focus on his frame which was such a peculiar sight that a slight chuckle escaped my lips. He was wearing semi-nice dress pants and a button-up collared shirt, but his attire was oddly splattered with paint. It wasn’t exactly the wardrobe I would have chosen for a brisk walk on the trails, but to each his own. His hands caught my attention next. Wearing black gloves garnished with remnants of paint he held two blue weights on his shoulders and carried a twinkle in his eyes. Not like a creepy Santa Claus twinkle that might have scarred your memory as your parents placed you on a strangers lap in good cheer, but his twinkle spoke of a vitality not found in the average person.  Immediately, I could tell this is my type of human. Bizarre. Quirky. Maybe people would whisper, “There’s the guy with a few screws loose”, but he wouldn’t care because he doesn’t try to fit in when he is born to stand out. Us folks with loose screws need to stick together and tighten those screws if needed.

His appearance intrigued me and he must have noticed my curiosity because he mentioned his affinity for painting despite not being any good.  He also mentioned his career as a CPA. Coincidentally, he believes he wasn’t any good at that either. Humble man meets hammock girl. We sound like misfit superheros that never made the cut in a comic book. Yet here we are with the great outdoors bringing our dreams to each others doorsteps.

We go on to talk about how he has seen people walking, running and jogging the trails but never hanging out in a hammock. I explained I was taking a staycation and adamantly believed a hammock between two trees in this wilderness couldn’t be much different than stuck between two trees in the Smokey Mountains where I really wanted to go. At least that’s the lie I will continue to tell myself to keep me from pitying the fact a vacation to the Smokey Mountains wasn’t in the cards for me this year.

As we continued to chat, he told me he wanted to be his own boss and that’s what made him begin a career as a CPA. I thought to myself being your own boss sounds fantastic until I realized I don’t like to listen to myself ever and my company owned and operated by me would crash and burn before the first payday. I have a hard time bossing myself out of bed in the morning. I can forget trying to run my own business. But what really intrigued was Bobby’s painting hobby. I could see his mysterious masterpieces literally marked him and wanted to know more about what he painted. Bobby excitedly explained he paints red umbrellas from his hexagonal kitchen that juts out across the yard and gives him the freedom to view the activity outside his window. Because I’m the type that likes to pry, I asked him if there was a story behind the umbrellas. He teared up, nodded slowly and mumbled something about a story. I hate making people cry, but when you make someone cry that you just met you feel like a massive jerk. I tried to change the subject because the last thing I want to do is make this man with eyes that shine like a vampire in the sun swell up with tears of sorrowful memories. We went on to bask in the thoughts of adventure to far away places like New York. Okay, not exactly the most exotic place to visit, but Bobby dreams of visiting the Rubin Museum of Art one day. I’m hoping one day he can visit the Rubin Museum of art and see one of his vibrant umbrella paintings on display as people congregate and ask each other, “I wonder what the story is behind this piece of art?”

Bobby proudly mentioned he is 75. He is spry for 75 and one of the friendliest older gentlemen I’ve had the pleasure of running into. During our exchanges he mentioned his wife passing away ten years ago. I could feel the love of their relationship in the way he tenderly spoke about her. Our conversation ended quite abruptly as he spoke about loneliness, began to tear up again and said he better go. I was at a loss for words. This is a moment where I wish I could rewind and tell him we all get lonely at times. This is a moment where I wish I would have jumped out of my hammock and gave him a hug and told him you don’t have to be lonely anymore. Instead, I cried as he walked away. And I prayed in my hammock that Bobby would not be lonely anymore.

You know, I waited for Bobby at my car in the parking lot. I thought maybe if I had a second chance to talk to him I could say all the things on my heart left unsaid. I thought about putting an ad on the milk cartons, scouring the neighborhood or putting an ad on Craigslist under the missed connections. But then I would be inundated with creepy messages from people willing to be Bobby if the price is right.

This chance meeting made me recall another encounter a few weeks back. I went to Tent City in Dallas for the first time. I worked at a homeless shelter for a year, but that didn’t prepare me to see rows of tents filled with people who have made their homes under an overpass in Dallas. As they started to gather for a meal and a message I had the privilege to talk to two men Peter, who had eyes that I imagine resemble Jesus’ eyes,  and Glen. As Peter was giving me useful football tips and suggesting what book I should read to understand the game , Glen chimed in and said,  “Miss Tiffany can I share something with you?” 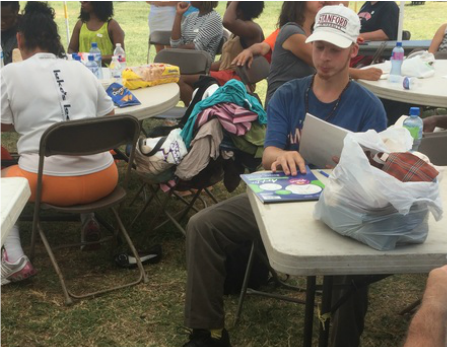 Eager to know what Glen could possibly want to share with me I politely excused myself from the conversation with Peter and crouched down at the table next to Glen. I saw him scribbling in a journal and he handed it to me to read. As it slid into my hands, I cradled the notebook like he just handed me a fragile, newborn baby. I knew the contents in this spiral were valuable. On the top of the page it read first song ever written. I felt honored to be one of the first people he trusted to read these lyrics. His first lines spoke of how it’s been two months since he talked to God and he felt lonely. I asked him why he felt lonely and he mentioned he hadn’t talked to God since he got out of jail two months ago. I tried to encourage him and let him know God is ready to talk to him at any moment, but I’m not sure he was convinced and sometimes my words even seem to fall flat when I can’t fully grasp how someone feels. I asked him what he planned on doing with his song and he hoped to get it published. I’m wanting Glen to hear his song on the radio one day. Or iTunes. Or whatever new-fangled system we have for streaming and sharing music. I left inspired by his courage to pour out his heart on paper in a sweet melody.

I started dwelling on this idea of loneliness. There have been times in my life that I’ve been surrounded by a crowd of people and felt intense loneliness and there are other times I’ve been by myself and never felt a trace of loneliness just enjoying my own company. I think loneliness is a state of the heart and mind. There’s a time when Jesus mentions being alone. He is talking with his disciples trying to explain to them that he will be leaving even though they just can’t seem to understand and he says, “But a time is coming, and has come, when you will be scattered, each to his own home. YOU WILL LEAVE ME ALONE.” Okay, if you stop there you are like man Jesus did understand loneliness and even knew it was coming for him. So, what does the perfect man do? Replaces the lie of loneliness with TRUTH immediately. “Yet I am NOT alone, for my Father is with me.” Jesus knew what was up! Loneliness didn’t have a license to drive his car. He got back in the driver’s seat as soon as he realized it. I know it’s easier said than done. The last thing you want to do is remind yourself of God’s truth. Sometimes, the best thing to do is to get around people that can fill you with God’s truth if you are too weak to do it yourself. I’m reminded of the promise written in Psalm 9:10 “Those who know your name trust in you. For you, O Lord, do not abandon those who search for you.” All we need to do is seek God first and foremost and then seek meaningful, mutual relationships. We were not designed to live in isolation. Our world has never been more connected, yet lacking depth and authenticity in relationships. Everybody is too busy to build long-lasting-lifetime-guarantee relationships and we settle for the new flavor of friend each month neglecting some perfectly good people along the way.

Whether you are a 75-year-old CPA that dabbles in painting or a just-out-of-jail homeless songwriter we all find ourselves facing the same struggles. We may be separated by distance, but hardships know no limits. We both come alive when dreaming of our published song or visiting a famous museum one day. We both are overwhelmed with bouts of loneliness. Life is messy. Don’t allow loneliness to linger so long you that you lose sight of the love God has for you.