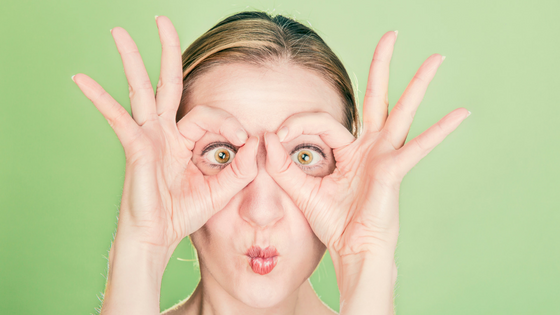 In my not too distant past, my weekends consisted of absurd amounts of time at bars drinking copious amounts of alcohol to numb my pain and make me feel “alive.” Have you heard the term beer goggles? They were a pertinent part of my ensemble on the weekends and I wore them proudly. Once I started drinking, the last guy that should get my attention at the bar became the first one on my radar. You know, the guy your mom always warned you about. The one you should run away from in the opposite direction, but I was attracted like a flying insect to a bug zapper. It’s sucky (for lack of a better word) to reflect on this part of my past. I am thankful that God can take my nights of drunken debauchery and use it to show me His grace goggles. You see, the two are completely different yet uniquely the same.

For those that aren’t familiar, beer goggles come into play after consuming alcohol. What once was ugly appears attractive.  It just blows me away that without God’s grace I am ugly, wicked, and evil but when His eyes see me through grace goggles I am His princess, His righteousness, His Heir and co-heir with Christ, His temple, and His masterpiece made in His image.

God sees me as I should be, not as I am. I am free of condemnation.

If we look at Luke 15 we are given three stories The Parable of the Lost Sheep, The Parable of the Lost Coin and The Parable of the Lost Son. In each story, the characters lose something or someone and abandon what’s secure and safe to seek and search for what has strayed. Can you think of the last time you lost something important? I really want to write a tangible story here of a time I lost my keys or something of value and once I found it I clapped my hands and shouted for joy over this once lost item. Right now, that sounds superficial when I am trying to connect this story to God’s grace which I could never perfectly and accurately describe in my own words. That’s what the Bible is for. All I can do is connect God’s word to how it has impacted and influenced my life. What’s coming to my mind is how I’ve lost my way along the way. I can envision the parable of the lost son and paint myself into the story as the parable of the lost daughter. I basically said to my heavenly father I am ready to live life on my own. I no longer desire to remain in You or under Your authority. Although I don’t remember ever being angry at God, I do remember wanting to distance myself from Him in high school after He neglected to answer my prayers. So, I did. I don’t need you anymore, God. What are you good for? How have you helped me? These were the questions catapulting around in my mind.

I refused to see that my own choices were weaving a web of pain in my life. I blamed my brokenness on a God that must have protested protecting me. And although God never left me he did allow me to make my own choice and ignore His voice.

My lifestyle paralleled the lifestyle of the son who squandered his wealth in wild living. I don’t know what wild living looked like for the lost son in detail. I do know he spent his father’s wealth on prostitution, and I imitated that with drunkenness, lust, sex, codependency and looking to the world to validate me and cater comfort. How many times have I taken my Father’s riches and rewards and used it to revel in my rebellion? This was my wild living. I didn’t understand the world only provides a false sense of security. The world offers shallow safety. The son spent everything, severe famine overtook the whole country, and he began to be in need. After I emptied myself in unhealthy, toxic relationships, in short-lived drunken nights that turned into long-lived grief, and passionate lust that left me giving away pieces of myself to others I began to be in need. There was a famine in my heart. My peace was parched. Everything that I believed to be life-giving was actually siphoning and suctioning my sacred soul. The lost son was stripped of everything. I was stripped of everything. I was down in the poisonous pit I produced and God used it to pivot me into my God-given power and potential. I took a good, hard look at my life. At the people I had hurt because of my hurting heart. Like in Luke 15:17 it says the son came to his senses. It’s like a Jesus jolt struck me. I was awakened to the reality that I was going 100 mph in the wrong direction. It doesn’t matter how fast you are going in life if you are moving in the wrong direction. I need to make a complete 180. I needed to return to my father. But would he accept me? Would he love me?  Could he really forgive me for abandoning him?

These questions plagued me, but they didn’t prevent me from pursing a path of purpose and giving God preeminence over my life instead of pride.

As the son returns to his father Luke says, “But while he was still a long way off, his father saw him and was filled with compassion for him. he RAN to his son, threw his arms around him and kissed him.” God’s grace is always the opposite of how I imagine it playing out in my mind.

When I think God will be angry, he wants to amaze me with his affections. Click To Tweet

I love the verse says while he was still A LONG WAY OFF. This one sentence makes me cry. While I still felt miles away from my mighty and marvelous creator He RAN to me. I was finally taking steps back to His arms. I was returning to Him. I changed my direction. I came to my senses, repented and returned to my rightful place with God. When the son finally gets to his father he confesses, repents and says he is unworthy to be called his son and desperately just wants to at least be like one of his hired men. Even that was far better than living with pigs.

What happens next? The father doesn’t yell, condemn or laugh. The father clothes him in three things – the best robe, a ring for his finger and sandals for his feet. He gives him gifts instead of guilt. They bring the fattened calf, have a feast and celebrate that his once dead son has come alive again. He throws a party instead of throwing him away. He was lost and now is found. He not only accepts his son back into his family, but restores his dignity and redeems his past.

I can’t imagine how the father felt every day waiting for his son to return. Maybe he heard other people coming down the road and rushed to the window hoping it was his son? Maybe every time someone knocked on his door he expectantly opened it hoping it was finally his lost son returning? Maybe when he was around other people he continued to hope for a glimpse of his son in the crowd? I imagine that’s how it feels for our father in heaven. He is all-knowing, but He is hoping and waiting for his lost children to return to him. I wonder if he wept as I wandered? I wonder if he was filled with sorrow as I squandered?

But the moment He saw my heart on the horizon what He hoped for was finally coming home.

I don’t know where you are today. Maybe you think everything I just shared is stupid. Maybe you just realized that you feel lifeless and want to be made alive in Christ. You crave that restoration. If your thought is, “There’s gotta be more to life!” I can assure you there is, because that was my exact thought when I hit the bottom of my poisonous pit.  God always has his grace goggles on. He will welcome you back with open arms, lavish you in his perfect love and make you new. My prayer is that I put away any goggles that are preventing me from seeing others as Christ sees them. My prayer is that I exchange my anger goggles, unforgiving goggles, pride goggles, people-pleasing goggles for the goggles of God’s grace.  My prayer is that instead of getting lost in the ways of the world, I will get lost in God’s word where I am truly found and where I find freedom.