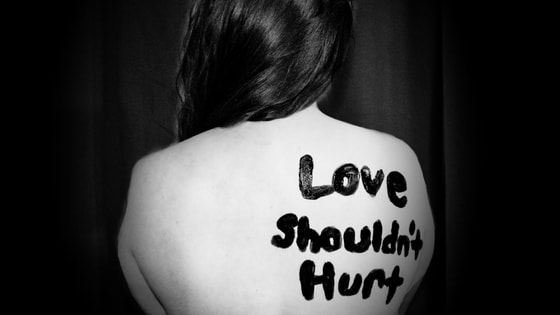 I remember a night cowering in the corner as my boyfriend at the time lifted his fist to hit me. He never followed through, but I remember thinking in my mind, “Please, not this again.” I had just gotten out of an abusive relationship and by “gotten out” I mean this person went to jail and that seemed like the opportune time to make my getaway.

My past is not pretty.

I was reckless in relationships and allowed people to control and manipulate me. I struggle with codependency and people-pleasing which is pretty much a recipe for disaster unless I am aware of these characteristics and make a conscious effort to run in the opposite direction of them. I find a sick fulfillment in emptying myself out to “fix” a person. Maybe this is a healthy quality in some situations,  but when it comes to your significant other it will only lead to destruction and result in wrong relationship repetition.  Like a dog to its vomit, so a fool repeats her folly. I was a fool.

In order to break a stronghold, you must first recognize it as one.

It’s that one thing you can’t seem to shake. The one thing that snaps you back every time. It’s almost like your kryptonite. The one thing holding you hostage in a Full-Nelson wrestling move and as much as you try or think in your mind about kicking its butt you can’t get free from. It could be alcoholism, lying, stealing pornography, codependency, sexual immorality, spending excessively, worry, or constant comparison.

The sooner you put your finger on that one thing, the sooner you can be on your way to living a life of freedom. The process of severing this part of you is painful, but when you persevere the life on the other side is worth the suck you may have to sift through to get there.

Once you recognize your stronghold then you must allow God to reveal to you the details of this. This can be a painful process depending on what you struggle with. For me, it’s the “type” of guy I’m attracted to. My view of healthy relationships has been completely distorted and my biggest fear is I won’t recognize a healthy one or I won’t be able to recognize someone who is controlling and manipulating because, well,  it’s all I’ve ever known.

In high school, my standards weren’t high at all.

I just wanted to date a guy that made me laugh. I found one. My friends warned me he was bipolar, but I waved their concerns away since I never saw this side of him. His jokes made me think I won the jackpot. I’ve learned the hard way to listen more to the people who are closest to you.

Sincere friends say words that sometimes sting, but they save you at the same time.

It’s almost like getting a flu shot. A real friend talks like the doctor, “You might feel a pinch, but this is to ultimately keep you healthy.”  Fake friends just tell you what you want to hear and agree with everything you say. This relationship eventually became abusive. In my experience, it started off small. It reminds me of the slow-boiled frog story. Hats off to whoever thought of this story that I refer to more than I should. You turn up the heat little by little and the frog doesn’t realize he is slowly dying by being boiled alive. If you turned the heat up right away, the frog would have jumped out of that pot and said “So long, Sucka!”

It started first with anger being taken out on objects like doors, car windows, car stereos, glasses and then it turned to verbally abusing me. I remember the moment when I broke. This is the moment when I turned into the person who would go on to hurt others.

This was the point of no return for me.

We were driving in the car. My boyfriend called me a bitch probably for the 500th time and I turned to him, finally snapped, and said, “If you want a bitch. I will show you a bitch!” It was downhill from there, Y’all. Apologies if the language is offensive to you. I’m just trying to keep it real.

The verbal abuse eventually led to physical abuse. I know what some of you might be thinking, “Why the heck did you not get out of there?!” Trust me when I say, even now I whisper to that girl in high school and wonder why I wasn’t stronger.  Why didn’t I feel courageous enough to ask for help? In one way, because of my story, I can empathize with similar women who do not leave the abuser. I am thankful for that perspective.

Being in an abusive relationship is often alternating between fear and love.

This person shows you the affection of someone who cares about you, but then if you try to leave instills fear in you. In my situation that was threats of the person killing himself and putting the blame on me. Or threats that all my secrets would be shared with the world. Well, now I’m doing that on my own accord, so that can no longer be used as a pawn in the game. Or reminders that I will never find anybody better followed by some form of guilt trip that will inevitably make me feel like the “bad” person and scum of the earth for even entertaining the idea of leaving.

A controlling, manipulating person will hold WHATEVER they can over your head to brainwash you into believing staying with them is better than life apart.

It’s a tragedy. It’s devastating.  I will fight to the death now for women in similar situations. Women who feel trapped. Women who don’t have a voice because it has repeatedly been taken from them stomped on and thrown in the trash. Those women who have been demeaned, belittled and broken down into believing they are not worthy to be in a safe, loving environment.

I thought once I was free from that relationship that I would never return to another controlling relationship, but if you don’t recognize the pattern you will end up with a different looking guy but same tendencies. He may not be in trouble with the law or beat you bloody so you think you’ve made progress, but if you take a good hard look you will see commonalities between your abusers.

Maybe this guy tells you how to dress. Maybe this guy makes snide remarks to cut you down. Maybe he discourages you from hanging out with your friends. Maybe this guy uses words to manipulate you into being with him. It might look like a different dog, but no matter what breed they all still bark. Pay attention to that bark.

Now, hurting people hurt people but in the same sentence, I want to remind you all that healed people heal people.

Although I found myself in another abusive relationship I too became the abuser. I could have been called a speech sniper as I sent my words like bullets straight to the heart. I would kick and scratch anybody who tried to hold me still and make me listen to them. My relationships were toxic, killing any good thing that even attempted to grow.

I’ve come to realize and accept it was never “good” in the first place, but there were good parts.

When I recall these memories it almost feels like I am telling the story of a stranger. I look back on pictures in my past, and my heart breaks for that depressed, angry, bitter, miserable girl. I was broken. When I tried to put myself back together again I would end up cutting myself on the glass shards of my soul.

Only Jesus could heal places in my heart no human hand could reach.

Only Jesus’ kindness could lead me to repentance. Only Jesus’ strength could enable me to write the snippets of my story from a place not of anger, shame or condemnation but from freedom, love, and forgiveness.

If this is you today. If you’ve harmed someone in a huge way let God guide you and deliver you from this pit.

All debt was canceled the day Jesus died on the cross and rose again. We just have to step into that forgiveness and freedom. If you’ve been harmed allow God to reveal his perfect, all-consuming love to you. He wants to heal every place that hurts. The bumps, bruises, and broken bones can all be restored because Jesus accepted the bumps, bruises and broken bones for you.

A bruised reed he will not break.

You don’t have to waste away in silence anymore. I plead with you to pray for the strength to find safety and refuge in the Lord. It will be terrifying. You might even panic and want to revert to what you know and are comfortable with, but I urge you to keep persevering. God will make a way in the wilderness and streams in the wasteland. He will restore the years that were taken from you. Yes, my God is not a God that will just refund you the years but restore and make it even better than before.  Just know you are not alone. You having nothing to be ashamed of. Your life is valuable and you are worthy of experiencing an abundant life. You are a warrior walking towards wholeness. Hold on tight.