Deprecated: sanitize_url is deprecated since version 2.8.0! Use esc_url_raw() instead. in /home/jesusfree1/public_html/wp-includes/functions.php on line 4859
 Sometimes Christians Get it Wrong - Jesus Frees Us 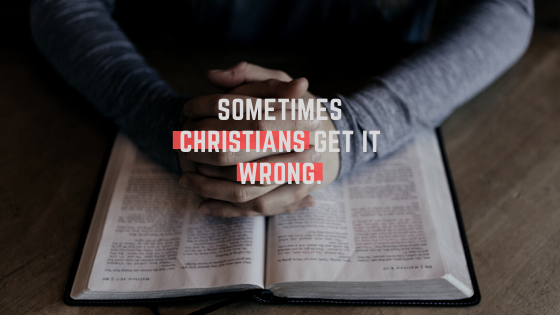 Sometimes Christians get it wrong.

Struggling with an agonizingly painful medical condition, a friend of mine rallied her online community for prayer. My heart dropped as I scanned the comments. What I want to believe was a well-intentioned message, reeked of shame and condemnation. Someone told the friend facing unimaginable pain to repent for her unbelief, pray harder, and have more faith if she wanted to truly be healed.

Instead of words of healing, she sent words of harm.

When a friend needed encouragement, she was given a lecture on where she wasn’t measuring up in her spiritual life.

As a perfect and faithful father, his heart breaks when we hurt, and when we have to feel the pain that accompanies living in a broken world.

As much as I was appalled by this person’s comment, the Lord gently reminded me that believers have been getting it wrong since the beginning of time.

There’s a story in the bible where Satan has permission from God to inflict suffering on a faithful servant named Job. His only restriction is he cannot end Job’s life. Right on cue, Job loses his livestock, his wealth, his kids, and ends up with painful sores canvased across his body.

This sounds pretty promising initially. They saw with their own eyes the depth of his suffering and their hearts were moved. After weeping over the physical state Job was in, they sat with him in silence for seven days.

His friends had the right intentions at first. But sometimes the good we do or say is overridden by the negative.

Once Job begins to speak, everything changes. You would think in a time of suffering, your closest friends would bring you comfort, but that comfort was short-lived with Job. Instead, his friends rebuked him and said he must have done something evil to be punished so severely by God. Just imagine if you were in the middle of misery and your friend showed up and said, “Hey BFF, is not your wickedness great!”

Or how about, “If you return to the Almighty, you will be restored, if you remove wickedness far from your tent.” Job 22:23

Talk about kicking a dog when it’s down.

A week after Job lost everything, including his very own children, his friends imply that Job brought these tragedies upon himself due to his wickedness. They wrongly assume that God blesses those who are faithful and only punishes those who sin. In the end, God sets the record straight and admits he is fed up with Job’s three friends. I mean, aren’t we all at this point?

As Christians, let’s stop assuming we know how God operates. Let our words be few if we know they are not constructive. In the words of my mamma, “If you don’t have anything nice to say, don’t say it at all.”

As believers, let’s think before we speak and spew out words that can’t be erased. But as believers, let’s also extend grace and forgiveness knowing that we all are flawed and make mistakes daily. We mix our experiences with our beliefs and form a distorted view of God and how we perceive Him to be.

As a communicator, words are also my downfall and I’ve had to bite my tongue more times than I can count. I’ve weaponized my words instead of lacing them in grace. Sometimes Christians get it right, but often we get it wrong.

Interested in monthly doses of encouragement sent to your inbox? Sign up for the Jesus Frees Us newsletter by tapping here.

4 Replies to “Sometimes Christians Get it Wrong”