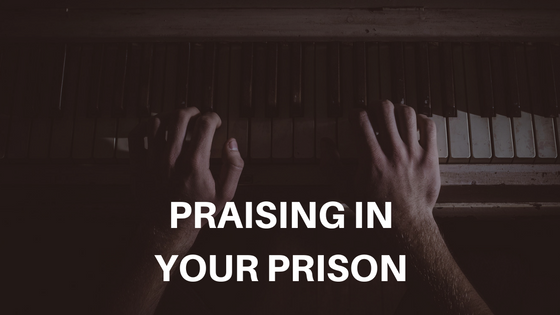 I get caught up in boasting in the Lord after bailing me out of a situation instead of praising him before a breakthrough.  After reading a story about two Godly guys named Paul and Silas in Acts, I’m learning firm faith is not created in those warm-fuzzy God moments. Fortified faith is created when the world’s been hard on you, but you believe God still has hope for you. Paul and Silas created quite the ruckus wherever they went. They were troublemakers and turned the world upside down. I admire their boldness and courage. If I just had an ounce of their faith would I turn the world upside down too? These holy hoodlums really ticked the town off in one particular scene and the magistrates ordered them to be stripped and beaten. After they were severely flogged, they were thrown into prison. I know not the sugar-coated spiritual story people want to hear, but Paul and Silas taught me about what it looks like to exchange a warm-fuzzy faith for a real-deal faith.  They made me propose the question, “Is it possible to praise God in your present prison?”
Is it possible to praise God in your present prison? Click To Tweet
Like my friend Akon would say, Paul and Silas are LOCKED UP. This is not a game of monopoly where you have a ‘Get Out of Jail Free’ card to play. They might be behind bars, but God is working behind the scenes to set them free.

“About midnight Paul and Silas were praying and singing hymns to God, and the other prisoners were listening to them.” Acts 16:25

I don’t know about you, but if I found myself in jail I think I would be pouting instead of praying. If I were just flogged I think I would be spewing anger instead of singing hymns. People are stuck in prisons they’ve built. Some people who have been hurt build bars of self-protection.  Hurt can’t reach you, but neither can healing. You live behind bars that were never meant to barricade you from the blessings of God. You complain, blame or pity yourself instead of praising God, the one who bulldozes down bars of shame, condemnation, insecurity, low-self worth, discouragement, depression and fear. The one who sets His children free. The one who has the power to release the ropes that keep you tethered to your past.

The verse mentions “the other prisoners were listening to them.” Can you imagine the other prisoners craning their necks to listen to the prayers and songs? How foreign it must have been to their ears to hear such a thing in jail. Probably as foreign as seeing me at a Justin Bieber concert. For Paul and Silas, every obstacle is an opportunity to trust that God is good and will work everything for good. It reminds me that even in my most excruciating moments others’  eyes are still on me. Am I representing Christ well? Do I stand out during suffering or blend in with others in a bad way?

“Suddenly there was such a violent earthquake that the foundations of the prison were shaken. At once all the prison doors flew open, and everyone’s chains came loose.” Acts 16:26

I want a faith overflowing with courageous prayer and worship that an earthquake occurs in my spiritual life. A faith so secure and powerful it breaks through anything that is confining me and delivers me from despair. I love that God did not free only Paul and Silas, but all the inmates that were listening to them pray and praise. When we are focused on the one who saves the ripple effects will save those around us too.

The jailer of the prison awoke to the earthquake, saw the damage and was ready to kill himself when Paul called to him to explain everybody was still sitting criss-cross apple sauce in their cells even though they could literally GET UP AND LEAVE. Absurd, right?!  I would have been beyond bewildered, but the jailer just brought them out and asked him, “ Sirs, what must I do to be saved?” It must have been quite the sight to see people who had every opportunity to walk out of jail, yet remain rooted. Sometimes God might call us to criss-cross apple sauce in the middle of our jail because He has a bigger plan in mind.   He might call us to stay in someones life when everybody else has abandoned him. He might call us to love that rebellious teen when you want to run the other way. He might call us to stay in the “rough” part of town to reach His children. He might say, “You don’t know what I am doing, but you soon will. My ways are higher than your ways.” He might need us to pause in our prison because he is painting a bigger picture that we only could peek at.

“The jailer took them and washed their wounds; then immediately he and all his family were baptized. The Jailer brought them into his house and set a meal before them. He was filled with joy because he had come to believe in God – he and his whole family.” Acts 16:33-34

Can you imagine being held hostage and then moments later saying ‘yes’ when your captor invites you over for pizza and game night? It’s preposterous, but apparently possible with the power of Jesus.  I’m learning more frequently NOTHING makes sense when Jesus takes over. It’s like a perpetual “opposite day.” You ever participate in one of those days as a kid? Where the boy you have a crush on says, “You are pretty.” You blush and get all bashful and then abruptly he says, “Fooled you. It’s actually opposite day!” No? Is that just me? Anyway, following Jesus is a lot like that. I’m left scratching my head over things that don’t make sense, but I sense they are going to make a way for God to show up and show off. When I want to go one way, but he wants me to go the out-of-my-comfort zone way. When I want to say, “You suck” and he wants me to say, “I’m sorry for my bad attitude.” When I look around and  think, “I want more”  and he wants me to look around and ask, “What can I do without?” When I want desperately to seek revenge, but he wants me to seek reconciliation instead.

Maybe you see yourself as the jailer and you are the one holding yourself hostage? Maybe there’s a part of you that is shouting to be unleashed into the world, but you are stifling, shoving and silencing that shout deep down inside. Maybe your jailer is an old habit or hangup? Maybe there’s an addiction to pain pills, alcohol, shopping, or sex that you notice has more power over you than you over it? Place your trust in Jesus. Only he can work behind-the-scenes to break down every barrier and barricade that is blocking you.  Place your trust in Jesus. Only He can level every lump and bump that’s hindering you. Place your trust in Jesus. He is the giver of grace – the ultimate “get out of jail free” card. How have you praised God in your present prison?