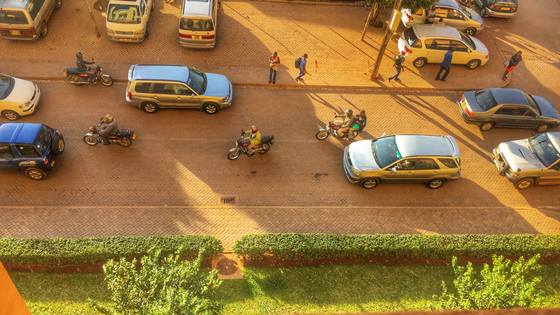 Kampala definitely fits the description of the city that never sleeps. The stores are buzzing with people and the roads are busy carrying hard-workers home at all hours of the night. Ashiram and I were driving home late one evening from across town with tired bodies and sleepy eyes. As we approached an intersection, the light turned yellow. I caught myself from raising the alarm thinking I might have the traffic light system wrong here. The light shifted to red as we coasted through the intersection. Immediately, I saw a traffic officer standing tall in his black boots and white uniform signaling to pull over. I looked at Ashiram and gently mumbled, “We ran a red light.”

I’ve heard the stories of frustration that involved Mzungos (the term used when referring to white people) encountering traffic officers. The traffic officers would wave them down and point out an unusual issue with their vehicle after the routine inspection. Usually, the Mzungo offered some sort of bribe or food in their car to be released. I silently prepared for a similar experience where the color of my skin would falsely indicate to the officer the amount of money in my wallet. The only difference is we deserved a ticket this time for legitimately breaking the law. We deserved the consequences of our disobedience, but would that be more severe with a Mzungo in the vehicle? I prepared myself for a double dose of dollar signs on the ticket expecting the worse possible outcome. We saddled up to the side of the road and I rolled down my window. I inhaled deeply wanting to blend in with the back of my seat and disappear from the situation.

The traffic officer plainly asked Ashiram if he was aware why he was stopped tonight. Ashiram calmly said no as the officer explained the error of running a red light. Ashiram apologized as he shared how he thought there was a traffic officer in the intersection waving us through (this is a common occurrence in intersections here). The officer went on to explain in detail how traffic officers only stand in the intersections during the day when traffic is the most congested and at night we are to follow the traffic lights. After he explained we thanked him for informing of us the law and teaching us the process. He beamed as he asked us, “Now I give you my ticket?” As I peered over him, I laughed at the absurdity of his question. I had no idea we could refuse a ticket here? Ashiram disagreed with the officer, “No. Please forgive me. Forgive us, Sir.” I chimed in, forgetting my present fear as the tension evaporated from my body, asking how long he’s served his community as a traffic officer and I thanked him for his excellent work. At this point the officer tilted his head back and let out a bell laugh. He turned back to us and explained in his job he does three things: educates, desensitizes and punishes. He grinned broadly when he finished telling us about punishment. We reiterated how thankful we were that he taught us the law and pleaded for forgiveness for our mistake. He conceded and allowed us to leave without a ticket in hand. I sat shocked and aware of my defective thought process. This traffic officer unknowingly taught me a lasting lesson.

I realized I’ve been slowly succumbing to generalizations allowing them to erode my optimistic outlook. One person’s experience will not be everyone’s experience, yet I’ve latched on to an individual’s experience in Uganda certain my story will be identical. In today’s tech-savvy, social-media stimulated world one person’s experience can lead to a revolt against a person, company or religion. Daycare workers abuse children. Muslims are terrorists. Christians are hypocrites. Africans have aids. How often do I go into a situation with a preconceived idea of what the outcome will be? How often does that lead to absurd fear or a restricted, flawed mindset? I enter into a situation with negative expectations making it more difficult to shift to a positive state. Instead of treating each individual or situation with an open mind, I bring in my sweeping generalizations never granting a true chance. I see the importance in categorizing things so that we can use our experiences to learn, to make predictions, and to make decisions. The problem is that too many of us have ingrained these generalizations in our minds that we now live by, and think by, such broad prejudices causing severe distortion of our realities. What if we erased those generalizations and believed the best in people instead of building barriers between people?