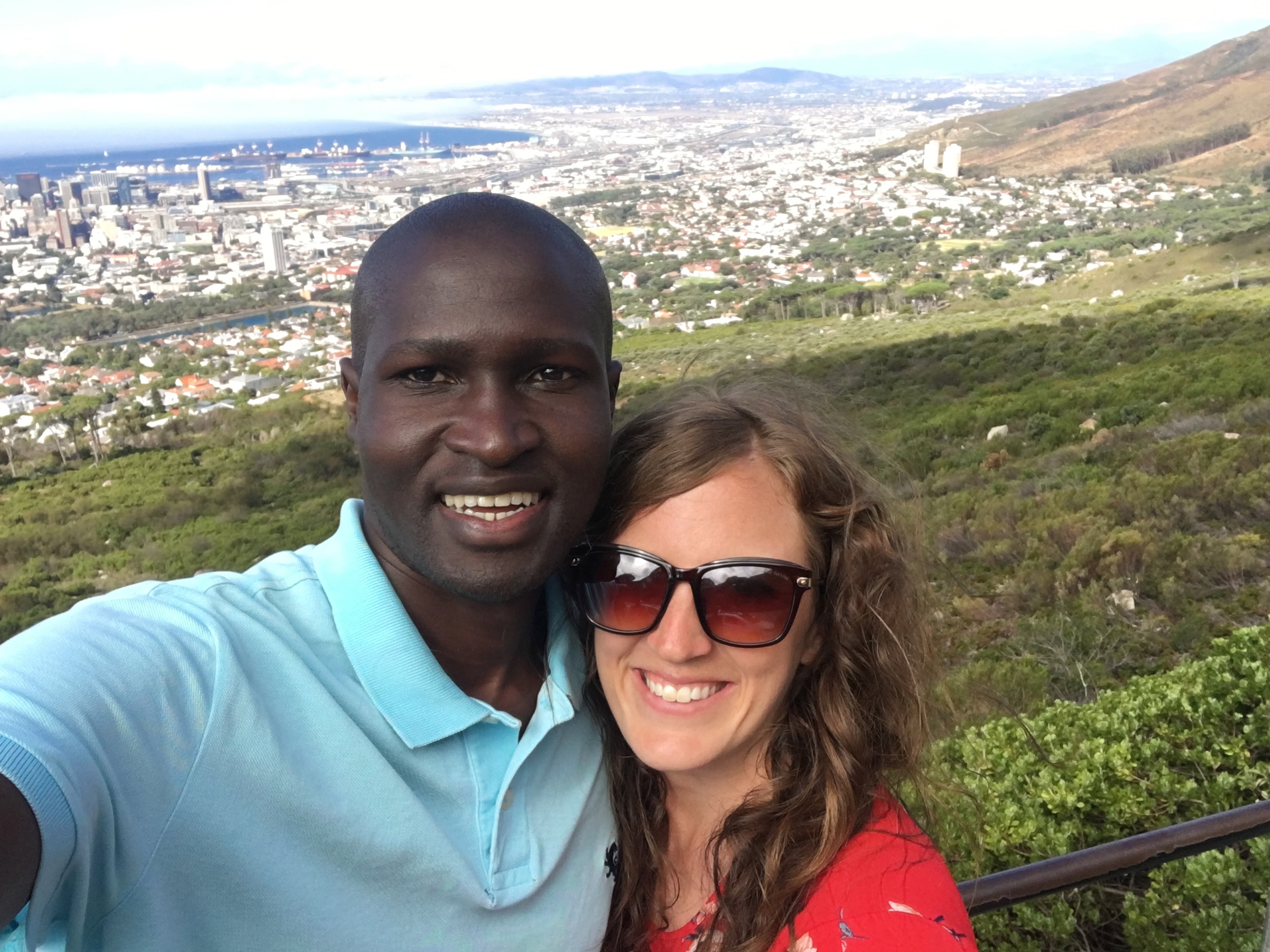 I try to pretend I’m a laid back wife in marriage, but inside of me is an uptight, meticulous planner that continuously combats anxiety. I wanted to maximize our time in Cape Town, so our week was packed with back-to-back action. On Tuesday, I planned for us to take a stroll to Truth Coffee, the restaurant dubbed as the place with the best coffee in the world by The Telegraph. As a person who is convinced coffee is my love language, I couldn’t miss out on this.

Bottoms up at Truth Coffee

The place is famous for its steampunk-concept interior. That alone is worth the price of coffee. Then some words on the menu caught my eye. No sugar would be needed in their coffee because, well, they are the experts at crafting coffee. I’m the mandatory two spoons of sugar girl. I add it to everything. So, we ordered coffee to test the absurd claim and threw in a Croque Monsieur for good measure. 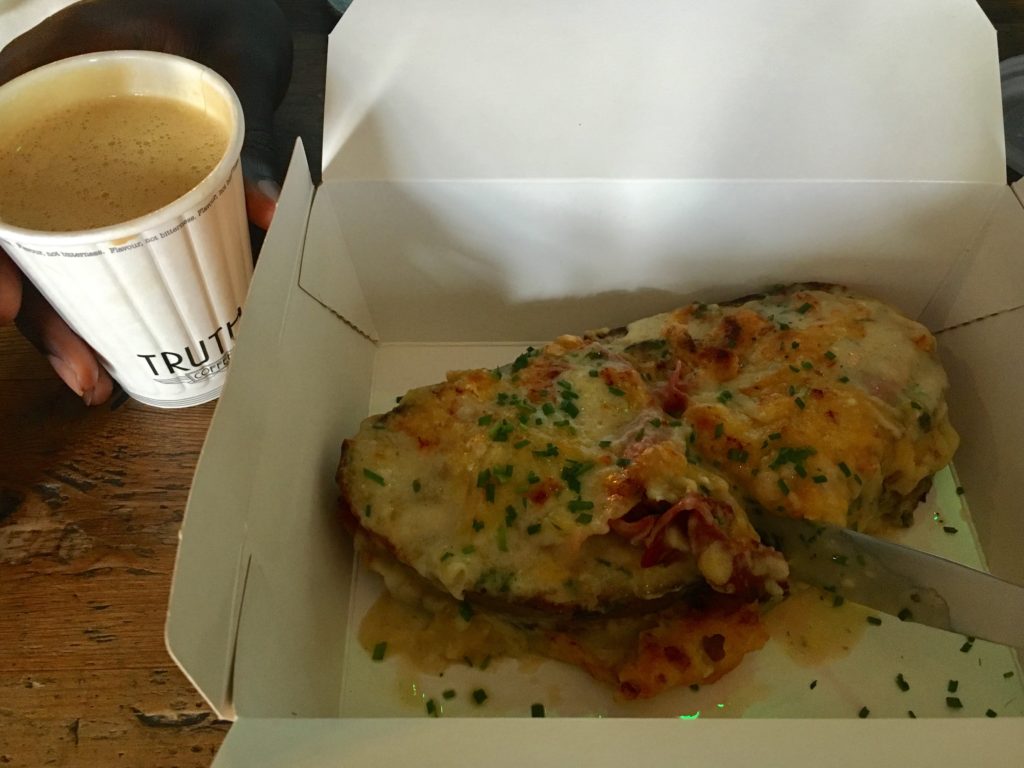 Out of everything I ate in Cape Town this was my favorite. The ham. The cheese. All my favorite food items melted together to devour. I’m pretty sure I gained twenty pounds on this trip. So long, matooke and rice and hello, burgers and ice cream.

We took a short walk over to District Six Museum. My husband and I definitely like to learn and the history of South Africa is painful and vital to know. We slid into a tour group and began listening to the humorous and charming guide. At one time, district six was a vibrant community bustling with freed slaves, immigrants, and merchants. But then the legislation passed by the white people meant more than 60, 000 people were forcibly removed to outlying areas known as the Cape Flats.

The laws and signage displayed from that time period are enough to make your stomach hurt. I held my husband close because I couldn’t grasp the idea that not too long ago our marriage would have been 110% outlawed. A forbidden love. It’s hard for me to understand how people can believe one shade of skin color has more value than another. Yet there I stood reading about how whites, coloureds, and blacks had varying degrees of privileges. 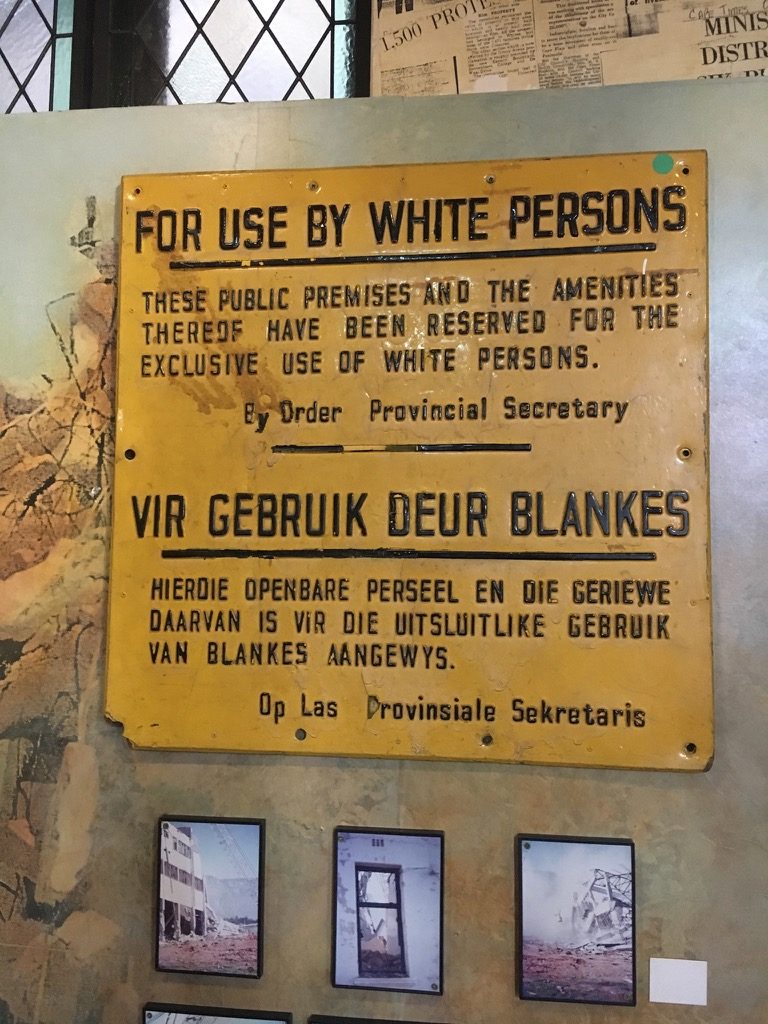 The guide kept glancing at us until he finally asked, “Where are you both from? Are you two…uh…married?” He beamed hearing that a black man and a white woman were on their honeymoon. Years ago, as a couloured man,  even looking at a white woman meant jail time or a beating. He stared at us intently and offered the newlyweds advice, “Marriage is for keeps. Always remember that.” 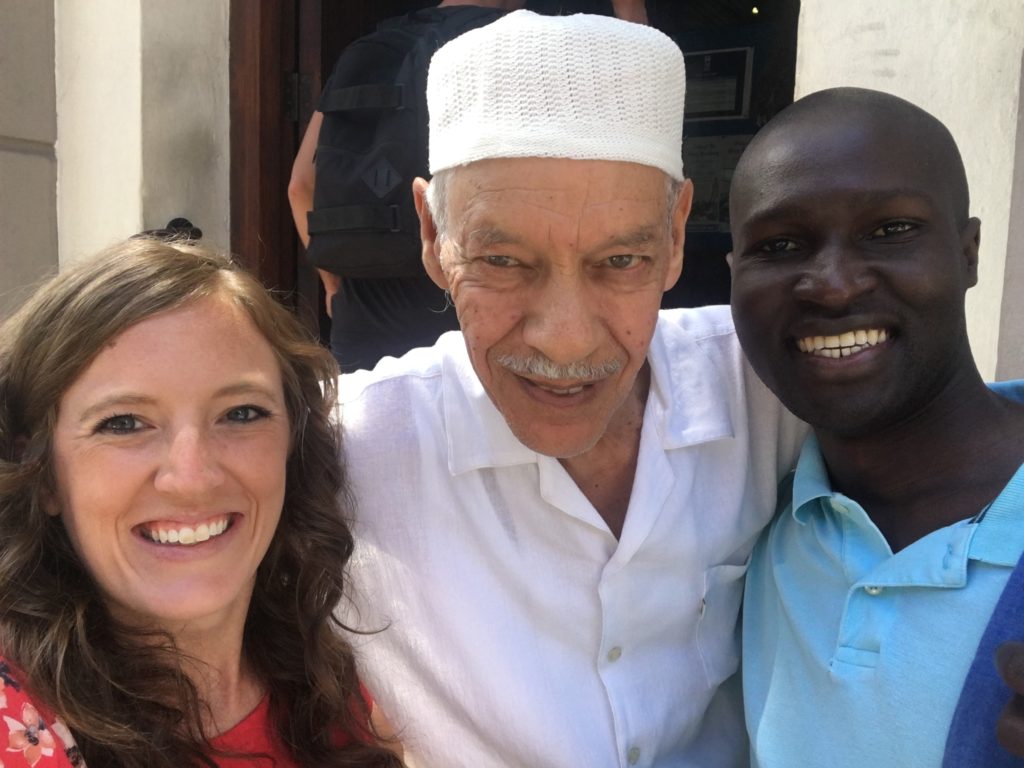 After our time in the museum, we walked over to Castle of Good Hope. We were too late for the tour and I was on a tight timeline to fit everything in for the day. Did I mention my need to meticulously plan everything? So, we wandered around the castle grounds on our own. Ashiram and I eventually split as he looked for the tour group and I went to explore on my own. I made my way to the Governor’s living area.

Y’all, I’m a FEELER. God made me this way. I feel the emotions of others around me. My body alerts me to the atmosphere around me. I don’t know what I was up against in this specific area of Castle of Good Hope, but as soon as I walked in the Governor’s house my heart started racing uncontrollably and I immediately felt compelled to pray.

When I found my husband, I wanted him to see if he sensed anything. We walked in the living area and again my heart started beating uncontrollably. Then as Ashiram said, “I don’t know what’s going on, but let’s just get out of here.” I felt a wave of grief and began to weep without reason. I don’t know what happened in these rooms, but I don’t think it was anywhere close to good or God-honoring.

We both worked up an appetite after those adventures and asked the locals around us where we could find THE GATSBY. What is The Gatsby? A colossal submarine sandwich with hot fries and seasoned meats crammed together. A half sandwich is designed to feed a small army.  It’s a signature, must-try Capetonian meal. Make sure you go on an empty stomach though. 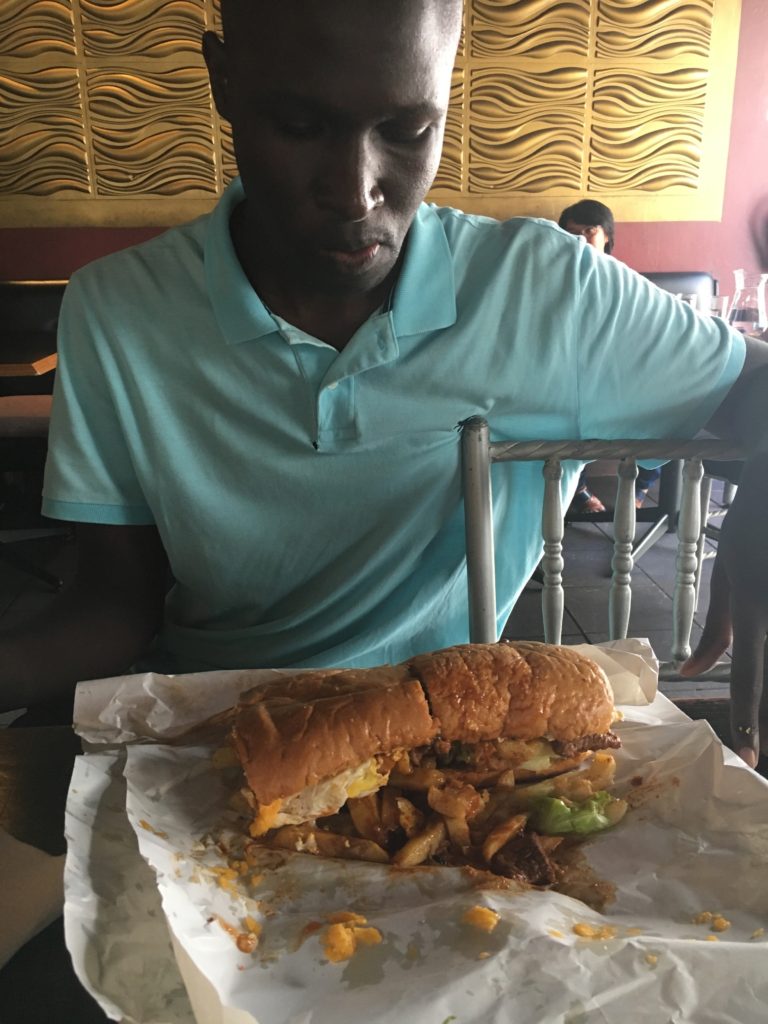 The view from Table Mountain

Feeling a little heavier, we headed to our next stop of the day – The Table Mountain Cable Car. Table Mountain is one of the new seven wonders of the world. As a little kid, when I would fly in an airplane to visit my dad in Illinois I always wanted to jump out of the plane and let the clouds catch me. I imagined the clouds as pillows in the sky. My dream finally came true as I stood surrounded by the cloud-made “tablecloth” on top of Table Mountain. 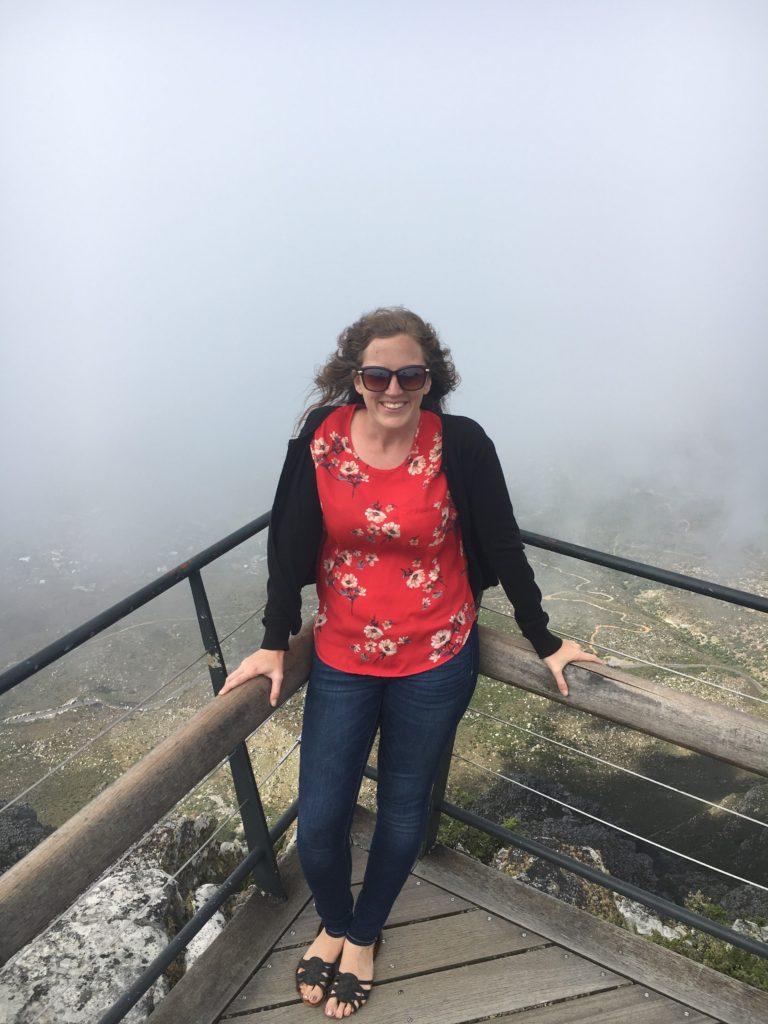 Cape Town continues to amaze me. The massive mountains and deep oceans surround you, constantly reminding you of God’s magnificent creation.

Read about what it’s like to stay in a village in Cape Town.