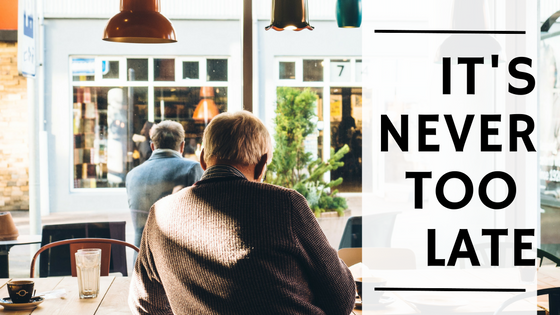 When I talk to people about my personal journey with Jesus sometimes I hear “It’s so awesome you turned to him at a young age and sought His healing for the harms in your past. But it’s way too late for me. My ship has sailed. I can’t do anything now. My life is beyond repair. I’ve screwed everything up.” I am troubled by this mindset and the lies we easily succumb to, but I also know I felt the exact same way. I’ve walked in those shoes. I didn’t think God’s forgiveness was for me. My sins were beyond his reach. I was brainwashed to believe my brokenness was way beyond what he could beautifully mend. My past was too wretched to be redeemed. Like a game of elementary school kickball, I didn’t think he picked me for the team.  I’d almost given up complete hope that my life could be turned around, but there was a sliver of my heart that believed just maybe what Jesus had to offer was true. All God needs is a sliver of your heart seeking him to show you who he is and his plans for your life. You see, the buzzer has not rung in this game called life. There’s still time on the clock. The points on the scoreboard point back to Jesus. He wants us in the game with him. He wants us on his team. He is for us not against us.  It’s not too late to put on the jersey Jesus is handing us and step into the arena.

It’s not about what I can or can’t do, but what Jesus already did for me on the cross. I try to remind myself of  this because as a person with the tendency to people please I think I must perform to be accepted. A glimpse of God’s grace is beautifully represented in the book of Luke. Jesus wasn’t facing death alone when he was crucified. He had two other men with him facing a similar death on the cross, except Jesus died as a perfect, blameless man for all of humanity while these men were criminals to be executed alongside him. They deserved to die whereas Jesus died for us as a sacrifice for our sins.

One man hurled insults at Jesus. “Aren’t you the Christ?” He yelled. “Save yourself and us!” Almost ridiculing the fact that if he were the Christ why isn’t he doing anything. I can feel the venom in his words as he spews them. Can you? It reminds me of times in my past when I used my words as daggers to deflate anything good around me. I wanted everybody to participate in my pity party. I wanted everyone to be dragged down to the depths of depression I was in.  I might not have said it but sometimes I thought, “Who died and made you princess of positivity?”  I desperately wanted to know what joy felt like and secretly envied any person that constantly walked around on cloud nine. I’ve been the man on Jesus left side, but I’ve also been the man on Jesus right side too.

We go on to learn the other criminal rebuked the first criminal that spoke on the cross. “We are punished justly, for we are getting what our deeds deserved. But this man has done nothing wrong.” Then he said, “Jesus, remember me when you come into your kingdom.”

I love that I have absolutely no idea what crime these men committed. I think that’s part of the beauty of the story. Jesus doesn’t hold you hostage to your crimes no matter how big or small you believe them to be, but sets you free from your past, present and future.

Jesus answered him, “I tell you the truth, today you will be with me in paradise.”

Here is a man moments before death asking Jesus to remember him in the Kingdom. He didn’t confess his sins. He didn’t get baptized. He didn’t become a preacher. He didn’t share his testimony with others. He didn’t go around on social media telling other people share this post if you believe Jesus died for you.  But moments before death he acknowledged who Jesus is and that he wanted to go from being by his side on the cross to by his side in heaven. It was just a heart surrendered to God and desiring His grace. God’s grace often makes no sense to me. Who on earth would welcome into paradise a man whose actions in life led him to be crucified? A perfectly gracious God. In one of Jesus’ last actions, he forgave a man who would never crack open a Bible. He would never bring another person to Christ.  He would never disciple other followers. Grace is a waterfall and we get to stand underneath it. It flows no matter if we choose to step into the water and allow it wash over us or avoid getting wet by watching from the sidelines.

If you think God’s forgotten about you or wants absolutely nothing to do with you I can promise you that is the furthest from the truth. He wants everything to do with you because He created you and he is love. If you think your best days are behind you and not before you that is a lie. God is not waiting to give you a tardy for being late to class. He is not waiting to scold you for turning to him today instead of five years ago. He wants you to be part of paradise. Even if you think it’s the last inning of the game and you couldn’t make a difference, He still wants you in the game.  Even if you missed every shot you’ve taken, He still wants you in the game. It’s never too late. He just wants to hear you say, “Jesus remember me, because I believe in you. I want a place on your roster. I want to exchange the jersey I’ve been wearing for yours.”