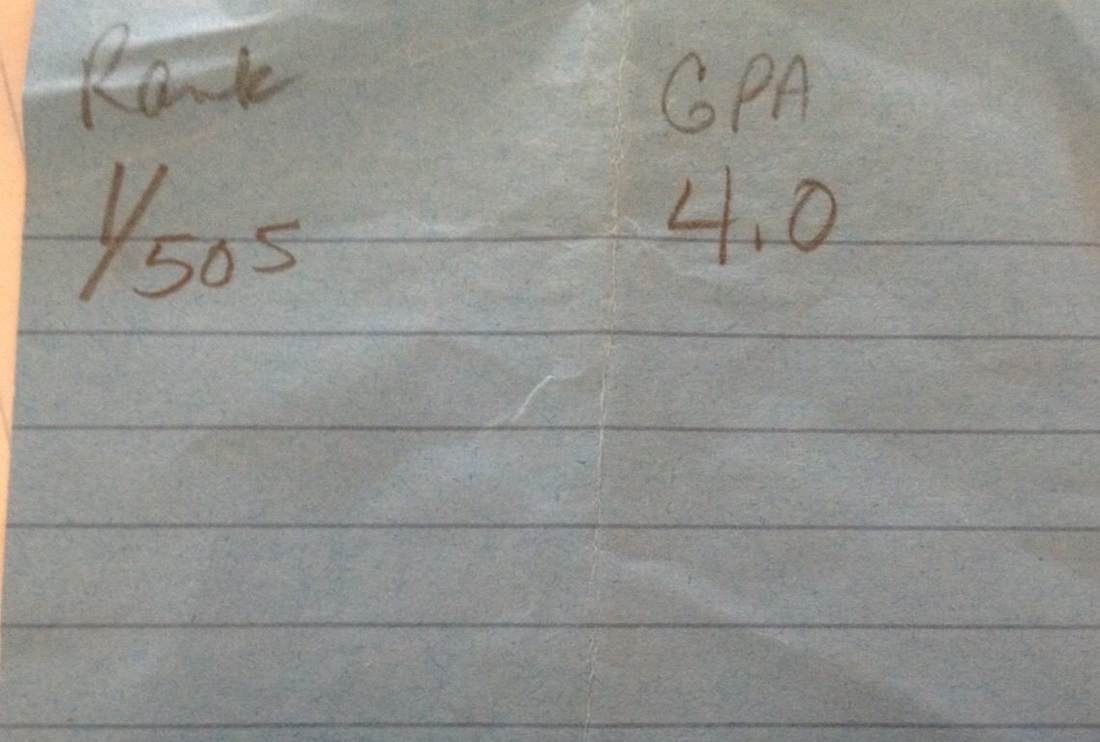 Over the years this paper slipped between the fridge and counter at my mom’s house. I still remember the day I was handed this tiny piece of paper. All the kids were chattering about their high school rank and wondering who would be at the top of the class. Nobody had announced it and everybody was eager to know. Intrigued, I hesitantly walked to the counselor’s office to find out where I stacked up on the list. She scribbled on this piece of paper, told me congratulations and passed it my way.

Perfect GPA. I folded this piece of paper so tightly you can still see the lingering crease marks from years ago. I was completely shocked. Once word got out, the kids at school no longer called me Tiffany, but referred to me as “number one.”

I’m not sharing this to toot my horn or reminisce on the glory days. I’m sharing this because this fragment of paper represents my deeply rooted fear of rejection and failure that I’ve been paralyzed by for years.

Would I have graduated first in my class? I don’t know. But what I do know is I wanted to graduate third in my class because that meant I avoided making a speech at graduation.

I avoided any possibility of rejection.

And that’s exactly what I did. I graduated third in my class.

In elementary school, I was a whiz at spelling. When the spelling bee rolled around, I opted out. Not because I couldn’t spell, but because the possibility of rejection or failure accompanied it.

In middle school I signed up for P.E. I played basketball throughout elementary school, but couldn’t possibly bring myself to try out for the team for fear of rejection. Fear of failure. Fortunately, my P.E. Coach/basketball coach saw my talent and encouraged me to try out for the team. I made A team. If I had listened to my fears I wouldn’t have played the game on the best team. I would have been left in the stands cheering on the stars.

I’m starting to wonder how much of life I’m missing out on because of fear of rejection and failure? As cliche as it sounds, the fear of striking out does keep me from playing the game. It’s safer in the seats, y’all. I think God is ushering me into a new season where He is nudging me to take more risks and to step out onto the water trusting the one who controls the wind and the waves.

By myself I’m paralyzed by perfection, crippled by cowardice, frozen by fear and in a fear-of-rejection rut.

But with God, I am a courageous conqueror bubbling to the brim with boldness. It’s time to risk in all the right ways and rise to new heights. It makes for a better story anyway.

2 Replies to “Fear of Rejection”