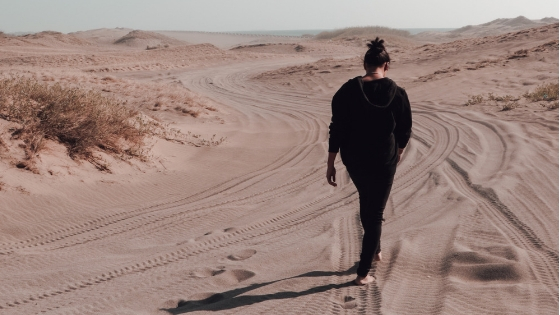 Right after college, I went headfirst into a corporate environment. My goal was to get my foot in the door and rise up in the ranks. In typical Millennial fashion, a fire ignited inside of me at the thought of all the possibilities within my reach.

The communications department drew my attention. I always wanted to be a storyteller and why not capture the stories of the talented, passionate people I worked with? A job opened up that was about four levels higher than my current position. I didn’t know this at the time, but it’s almost impossible to make that career move without some serious approvals. I approached my manager with the opportunity and he said, “Go for it!”

With his blessing, I typed up my application in a frenzy.

Was I naive? Possibly. As a girl that intentionally graduated third in her class to avoid making a speech in front thousands of people, to actually gather every drop of courage inside of me and show up to the interview like I deserved a chance was a miracle.

I can’t remember how the interviews went. I probably leaned heavily on my positive, can-do attitude and shied away from my evident lack of professional experience in communications. A week later my phone rang. The V.P. of Communications wanted me to come to his office. By this point, I already knew the outcome. I walked into his office with a smile, but inside I was bracing myself for the job breakup.

If you ever let someone down (hint: that looming breakup that can’t be avoided), follow the steps of this VP. He sat me down and began to share how much he loved my ambition and energy.

He built me up with such positivity I nearly forgot the purpose of the meeting was to reject me for the position.

As I sat beaming from his compliments, he then slid right into the whole ‘you have literally zero experience at a newspaper or any other news publication so it doesn’t make a single lick of sense to hire you right now.’ He ended it by telling me not to count communications out of my future plans. I don’t believe there’s ever been a better rejection speech.

I didn’t leave that office deflated but inspired to pursue my purpose.

There’s a story told in the bible that I absolutely love to come back to when rejection has left its mark on my life. A demon-possessed man is hanging out in a tomb because nobody could keep him contained. When Jesus arrived on the scene the man with evil spirits ran to Jesus and began shouting at the top of his lungs. Basically, Jesus struck a deal with the demons and sent them into a herd of thousands of pigs that ran into the lake and drowned.

Here’s where it gets interesting. As Jesus jumped in the boat to set off, the man who had been demon-possessed just moments ago began to beg to go with Jesus.

Jesus went around telling people, “Follow me,” but the one man who actually pleads with Jesus to allow him the chance to follow him is redirected.

Maybe we should all start seeing rejection as Jesus’ redirection.

“Jesus did not let him, but said, ‘Go home to your family and tell them how much the Lord has done for you, and how he had mercy on you.’ So the man went away and began to tell in the Decapolis how much Jesus had done for him. And ALL the people were amazed. ” Mark 5: 18-19

Just moments ago the people were afraid and wanted Jesus to leave their region, but because this man went back to his town and shared his testimony many people were amazed. Many people now had the opportunity to encounter Jesus through this man’s testimony.

Jesus not only knows the best place for us to be, but he knows our purpose in that place.

He knew that the testimony of this man would be more powerful in a place where people had witnessed his “before” and  “after” transformation.

The day I left that office after hearing I wasn’t chosen for the job could have gone many directions just like the story of the demon-possessed man could have too. The man could have sat in a slump and kept quiet since Jesus refused to let him come in the boat. The man didn’t let Jesus’ redirection deter or discourage him. He went away with a purpose different from what he originally had in mind.

I left that meeting with my passion for writing awakened. Instead of moping around feeling sorry for myself, I channeled that energy into creating a blog. And four years later I’m still writing. Maybe if I had not experienced that rejection I would have never put pen to paper again. Rejection revealed my purpose. Has it revealed yours too?

4 Replies to “When rejection reveals your purpose”