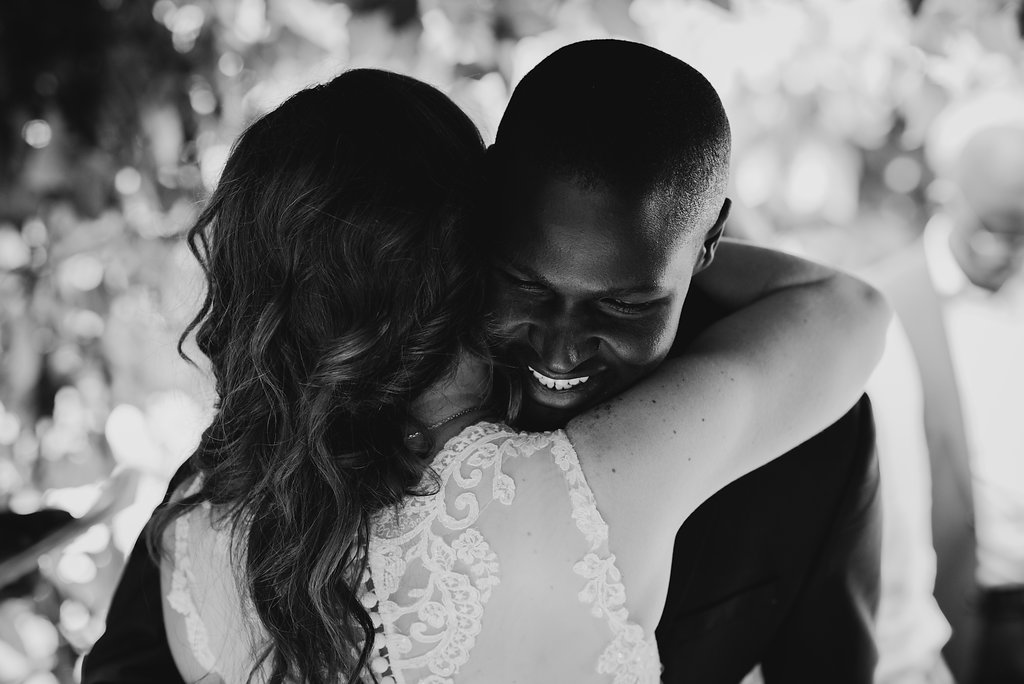 Today marks three months of marriage for my husband and I. There are days marriage is so easy I think everybody should do it, and there are days it’s so hard I wonder why anybody does it. On February 26, 2017 I wheeled my two suitcases and two carry on bags into DFW airport to begin a departure to a relatively unknown life. I felt this gnawing growing inside my core reminding me life as I’ve known it would never be the same. With a parade of thoughts swirling in my mind, I resolutely boarded the plane to take me halfway around the world to a different home. Some days I sensed I was hitting the ground running in Uganda, other days I felt like flattened roadkill plastered on the hot pavement wanting desperately for someone to scrape me off the ground. I’m thankful for a husband that constantly helps me navigate the new world I am in, extends grace when I am cranky, practices patience during my culture shock spasms and loves me without faltering. I am no expert in marriage, but I am an expert in learning and have compiled nine essential lessons I’ve learned in the first 90 days of marriage.

Embrace what makes your spouse unique

I have slob-like tendencies. People at work would tell me everything has its place as they stare disapprovingly at my jacket and backpack sprawled across the floor.  My mom used to threaten me by saying she was going to take a picture of the backseat of my car and send it to my husband-to-be. At any given moment, I could be carrying a wool scarf during Texas’ triple-digit temps, a rotting vegetable, and a roll of disintegrating toilet paper. I believe in full-disclosure and willfully told Ashiram my personal convictions – the floor is a perfectly good place to store everything. Ashiram on the other hand is organized and tidy. His bookshelf is categorized, and yours truly hasn’t yet learned the ropes on putting the books back where they belong. As I shove a book in the horizontal gap between the top row of books and the bottom of the wooden shelf I triumphantly think to myself, “Won’t any open space do the trick? It’s like a game of Tetris.” No. No it won’t. I eventually clean up my breadcrumb messes around the house and Ashiram puts the books back in their designated places. We’ve discovered embracing each other’s quirks and appreciating our God-given design instead of trying to force the person to change their personality to our preferences gives us the freedom to fully flourish.

No. I am not suggesting you lift the dining room chair to bash over your husband’s head, although I am sure times exist when this is a tempting solution. As a kid, I can remember watching WWE as I marveled at Hulk Hogan’s mustache and experienced disappointment when it was impossible to smell what “The Rock” was cooking from my couch. If you have any exposure to wrestling, you know the widely popular tag team technique. Wrestlers alternate their time in the ring with an ally waiting on the other side of the ropes. During our first bout with sickness Ashiram constantly concocted teas to eliminate my cough attacks. When that same sickness found its way to Ashiram, I took my turn cooking tomato soup from scratch and brewing teas to remedy his cold. We don’t have regimented gender roles and if there’s a night I don’t feel like washing, peeling and boiling potatoes for dinner, he takes over. If the dishes begin to pile up (see above for my slob-like tendencies) he goes into execution mode and washes those dishes like he’s on a high-speed assembly line. A tag-team partner in life’s wrestling matches brings strength when you are weak, offers hope when your are discouraged and supplies a different angle to compliment your views.

You can compete with each other in one area only

I once dated a man who took competition to a whole new level. He would even compete on who got the most hugs from the pastor. Everything in our relationship was a constant point system of who was better than the other. It’s exhausting. Constant competition will make you want to claw your eyes out, but I have discovered there’s one area where competition cultivates growth in your relationship.  Compete to out love each other. We are definitely still a work in progress in this area. Since we spent the majority of our time long-distance we are now learning how to love each other in close proximity. I might leave a post-it note on the front door welcoming my husband home after a tiring day at work or write up a love letter, fold into an airplane and launch it in his direction when we are at the office. Be careful what kind of details you share though because paper airplanes decide to fly in their own direction and can end up in the hands of the person you didn’t intend. Talk about awkward.
“Let no debt remain outstanding, except the continuing debt to love one another, for whoever loves others has fulfilled the law.” Romans 13:8

When your wife cries, come close and cling to her

I have heard of men withdrawing from their wives when they are in a moment of sorrow. The anguish we feel in the moment will only be accentuated by our husband’s abandonment. I get it. The vulnerability and downpour of emotions a woman releases can make a man want to head for the hills. I’ve had at least three shoulder shaking, lip quivering, weeping sessions with Ashiram by my side. He doesn’t attempt to solve the problem anymore or offer suggestions that will only prompt me to shoot a bewildered glare in his direction. He wraps me in his arms and holds me close to his chest as I tearfully tremble. My husbands presence produces peace in these moments. His reassuring touch is a rock I can reach out to as a reminder that I am not alone.
“Therefore a man will leave his father and his mother and cling to his wife, and they will become one flesh.” Genesis 2:24

Becoming one with your spouse, doesn’t mean you become one with their shampoo

At first, I tried to be a laid back wife and whatever Ashiram had in the house I would take it in stride. Head and Shoulders for shampoo? Great let me lather up my scalp. Sensodyne for toothpaste? Let me get a squeeze of that paste made for delicate teeth. Quickly I realize his preferred shampoo dried out my suffering, brittle hair and his choice of toothpaste left my tongue feeling like it was covered in a layer of velvet.  You don’t have to wear matching outfits and be one in everything.

We decided to make a habit of praying together every morning before we cross the threshold into the chaos of the real world. I noticed a complete shift in our days after we began uniting in prayer. It’s a game changer in your marriage and in the outcome of each day. Rely on God to build your marriage and keep Him at the center of all you do. Intimacy with Jesus creates increased intimacy with your spouse.
“Unless the Lord builds the house, those who build it labor in vain.” Psalm 127:1

Allow sacrifice to strengthen your marriage

This is been my hardest lesson to learn and God continues to humble me to a place of relying on him for basic necessities. I left my corporate job, making a decent salary, for a foreign land with limited independent income. I have significantly lowered my standard of living. In the US, I could go to the grocery store and purchase whatever my heart desires and dump it in my cart. On average I would spend $50 dollars a week on groceries. I wasn’t too worried about cutting costs or only having enough money for a specific item. If I shopped at Target, my bill might go from $50 to $150 when I spied trendy shoes or a cute outfit. Our income is more unpredictable and less of a steady stream. One week we can afford to purchase pizza for our friends, the next week we are running out of gas on the street. As my husband continues to pour into his startup company I’ve learned to ration out internet data, electricity consumption and weigh my options at the grocery store picking peanut butter over ice cream. I’ve read the statistics. One of the leading causes of divorce is financial stress. It’s important to come into alignment with your spouse on the financial sacrifices you are making and why. I remind myself we are living comfortably compared to many and God has supplied my every need so far. Plus, I am confident one day we will look back and smile at these days of small beginnings and big sacrifices.
“First, help me never to tell a lie. Second, give me neither poverty nor riches! Give me just enough to satisfy my needs. For if I grow rich, I may deny you and say, “Who is the Lord?”And if I am too poor, I may steal and thus insult God’s holy name.” Proverbs 30:8-9

Don’t make your marriage harder than it has to be

I can bet you a million shillings, I could find trivial matters to fight over every single day of my marriage if I wanted to. But how would that benefit my marriage? One of my married friends gave me this question to ask when dealing with conflict, “Is this the hill I want to die on?” I translate this to mean I need to stop and ask myself, “Is this a fight worth having? A problem worth pursuing?” Don’t go about turning mole hills into mountains in your relationship. Focus more on what is right in your relationship than what is wrong. It becomes a nuisance spending time with someone who nags incessantly. Go easy on each other. Make grace your default.

You will make the best decision by marrying your best friend

I say this often, but we built our relationship on a friendship foundation first. We weren’t swept up by lust or captivated by warm-fuzzy feelings. We wore bullet-poof vests instead of rose-colored glasses because we found ourselves attacked by everybody and their mom’s opinion about the legitimacy of our relationship and content of Ashiram’s character. My genuine, deep compassion for Ashiram as my best friend and the opposition around us  continued to cement us together and fortify our foundation. When chemistry fades, commitment is what you will fall back on.
What’s the most valuable lesson you’ve learned during marriage?
Comments (9)
christian marriage husband jesus jesus frees us marriage marriage advice newlyweds weddings wife